New York: These Streets Will Make You Feel Brand New

It’s been seven months since we came home from our U.S. vacation, yet I can still remember what this trip made me feel. Los Angeles broke my heart, San Francisco brought me back to high school, Washington D.C. made me feel safe, but New York? New York gave me hope.

It took a while for me to write about New York because I had a hard time putting into words what the city made me feel.  Everything that Alicia Keys said in her song “Empire State of Mind” was real. Its streets will make you feel brand new, and its lights will surely inspire you.

I almost gave up on my dreams when I went to Los Angeles. I was heartbroken and discouraged. I didn’t want to dream anymore, but when I got to New York, it made me feel that the possibilities are endless. I was once again encouraged, and I felt so alive! The city gave me hope, and I was glad to be there.

Among the four cities that we visited, it was New York that we stayed the longest. We went to all the touristy sites during the first three days, but eventually laid back the next days and experienced the city as if we were New Yorkers. It was magical. There’s something about the city that makes you want to go back. And because of the movies I’ve watched, it felt so familiar.

My favorite part of our experience was watching a couple of Broadway shows. We watched Aladdin, Pretty Woman, and my all-time favorite: Hamilton. You can’t go home without watching one, and it’s part of the experience.

I already miss New York, and I can’t wait to get back.

Below are the photos that we took during the trip. I hope you’d love it! 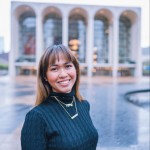 Micah Sarceno is a 27-year-old Born Again Christian from Cebu City, Philippines. She has a passion for photography and storytelling. On this blog, she writes about faith, lifestyle, and travel.